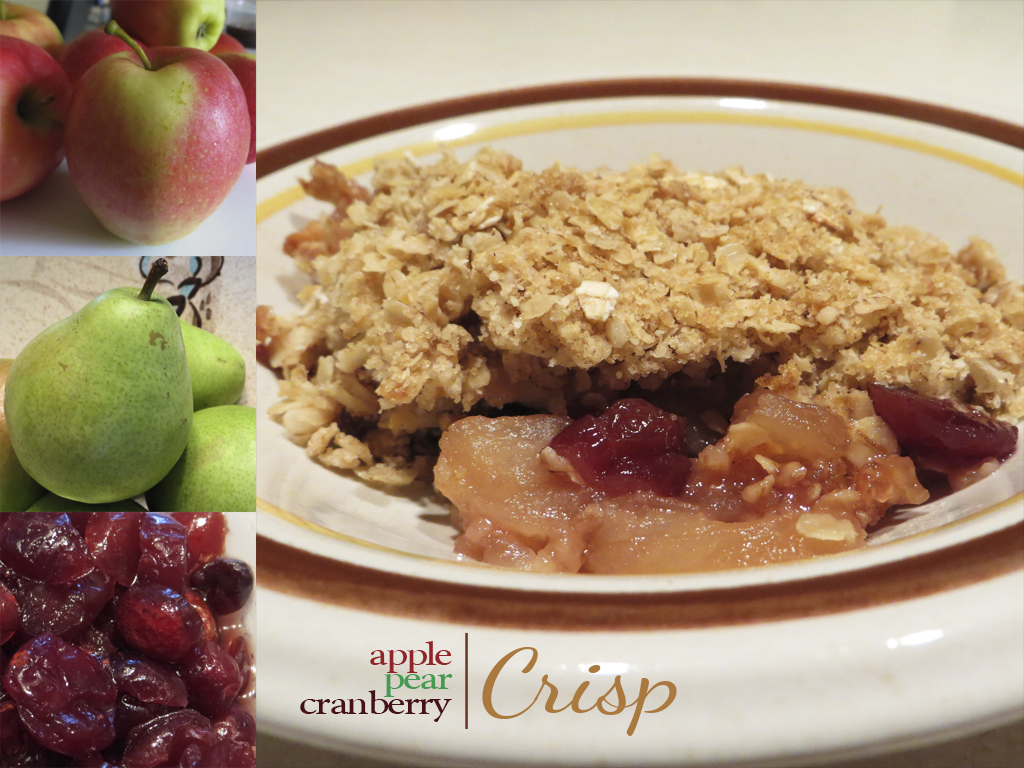 Baking Time! Exercising my baking muscles a little, I baked an Apple, Pear, and Cranberry Crisp to use some of the fruits in season. In general, a crisp is one fruit but wanted a bit more flavor and different so lucky I was able to find that. This tasty three fruit crisp dessert can be enjoyed warm and possibly with a scope of ice cream on top when necessary. Making this dessert is not too difficult with the main thing to do is make your topping which is a nice sweet streusel then your filling which is mainly just fruit when both are made place them in the pan and bake.

With a title like Apple, Pear, & Cranberry Crisp, the name already gave me an idea of how to layout my design and what photos to take. With three fruits meant three ingredient photos to help give the visual of what is in the crisp. So, I had to setup my ingredients to get a good photo before using them for the recipe with also placing them each in a place with good lighting. Apple and Pear photos focused on one good looking product with others behind it to give the background in the photos some substance while cranberry was focused on a group of them. With ingredient photos done it was time for the main product photo, the key here was to show the crisp with some of the filling showing. So it became a matter of plating it just right where the top streusel topping stayed together and get the filling to be oozing out on one side so you can see that in the photo.

Layout and logo composition was to be the exact same where the ingredient photos went top to bottom in the order apple, pear, & cranberry just like the words in the logo. For the logo, each fruit word also was given a matching color to what is usually associated with that fruit so apple with red, pear with green, and cranberry with maroon. Course the main word to focus on is “Crisp” since that is what defines what type of dessert this is so is given a big font size and a hand writing font style. A last little touch for “Crisp” was to do the color association again with focus on the streusel topping color which is light brown.